Despite the promising news from Pfizer and Moderna, other efforts – which may be even more effective – continue around the world 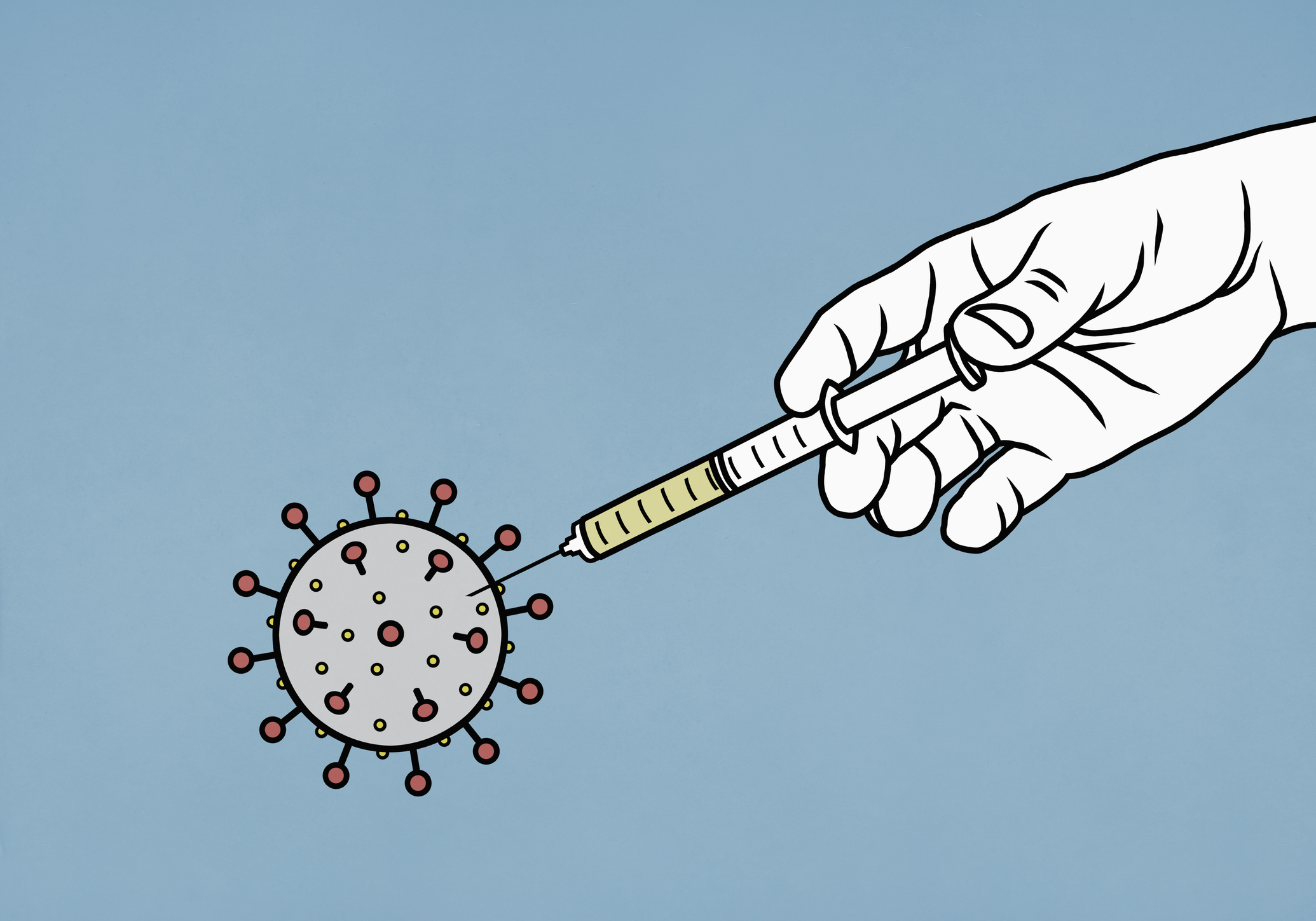 While everyone celebrated this month’s news that not one but two experimental vaccines against Covid-19 have proved at least 90% effective at preventing disease in late-stage clinical trials, research into understanding how the Sars-CoV-2 virus, which causes Covid-19, interacts with the human immune system never paused.

There are plenty of questions still to answer about the Pfizer/BioNTech and Moderna vaccines: how well will they protect the elderly, for example, and how long for? Which aspects of the immune response that they elicit are protective and which aren’t? Can even better results be achieved, with vaccines that target different parts of the immune system?

We are likely to need several Covid-19 vaccines to cover everyone and as a contingency, in case the virus mutates and “escapes” the ability of one vaccine to neutralise it, a real possibility in light of the discovery of an altered form of Sars-CoV-2 infecting European mink. But we also need better methods of diagnosing and treating the disease. The recent suspension of two major vaccine trials due to serious adverse events is a salutary reminder that there’s much still to learn and a pandemic, while no one would wish for one, provides scientists with a golden opportunity for learning.

Like most Covid-19 vaccine candidates, the Pfizer and Moderna vaccines are injected into the muscle, from where they enter the bloodstream and stimulate the production of antibodies to Sars-CoV-2 (specifically to the protein that forms the spikes covering its surface). But antibodies are only one component of the body’s adaptive immune response, which develops over time, in response to invasion by a virus or other pathogen. There is also innate immunity, which we are born with and that is mobilised instantly upon infection, but is not tailored to any specific pathogen. “There are a lot of moving parts to this,” says immunopharmacologist Stephen Holgate, of the University of Southampton in the UK, who wonders why scientists have focused on so few of them.

Holgate is one of the founders of Synairgen, a University of Southampton spin-off company that has been testing inhaled interferon-beta, an important innate defence that works by shutting down viral replication, as a treatment for Covid-19. A major international study backed by the World Health Organization, called Solidarity, showed that interferon-beta was not effective in treating hospitalised patients, but more recently Synairgen has published the results of a small pilot study suggesting that given in patients with milder disease – and inhaled rather than injected under the skin – it enhanced recovery.

“The reason bats are able to harbour these viruses in such large numbers is that they have such a strong interferon response,” Holgate says. “That is why they don’t develop disease.” Synairgen is now testing whether interferon-beta can prevent hospitalisation in patients who inhale it soon after testing positive, at home. If the approach works, he says, the advantage is that it will continue to do so even if the virus mutates, since interferon’s action does not depend on the structure of the virus.

Another immune response that has received a lot of attention in the context of Covid-19 is that of T-cells. Along with B-cells, which generate antibodies, T-cells form part of the adaptive immune system and they perform two main functions: they help B-cells do their job and they kill infected cells. Both B- and T-cells retain a memory of past infections, meaning they are mobilised more quickly when a pathogen appears for a second or subsequent time.

In May, US researchers reported that T-cells extracted from human blood samples taken before 2019, and exposed to Sars-CoV-2, showed a memory for coronavirus infection. This suggested that previous exposure to different coronaviruses, such as those that cause the common cold, might be sufficient to prime T-cells and raised hopes that they could protect against Covid-19. Those hopes were bolstered by a report of people fighting off infection even though they developed only a T-cell response and no antibodies, though the number of patients in that study was small and the evidence therefore hard to interpret. Lockdown sceptics pointed to these studies as evidence that more of the population was protected against Covid-19 than was thought, but some immunologists say they did so prematurely.

As Akiko Iwasaki of Yale University in the US explains: “T-cells cannot prevent infection, they can only respond when there is an infection.” So although they could potentially reduce the severity of the disease, they can’t stop its transmission between people. Also, there is still no proof that the T-cell response is helpful. “It’s likely that both antibodies and T-cells are important in protection, but we have zero evidence so far for protection of any kind,” says immunologist Zania Stamataki of the University of Birmingham in the UK.

Obtaining that evidence will involve seeing how people either exposed to the virus naturally or vaccinated against it respond upon reinfection. Vaccine trials could provide such evidence, as could a number of studies of the correlates of protection in natural infection. Iwasaki’s group, for example, is comparing the immune responses of unexposed, sick and recovered individuals, while virologist Florian Krammer of the Icahn School of Medicine at Mount Sinai, New York City, and colleagues are tracking those responses longitudinally, in thousands of people exposed naturally over time. Then there are the so-called challenge trials that are due to be launched by Chris Chiu of Imperial College London and colleagues in January.

In the first stage of these trials, about 30 young, healthy individuals will have their immune status measured before and after deliberate exposure to Sars-CoV-2. The trials will generate data on immune responses in the blood, but also, because the virus will be delivered via the nose, on any local immune response that develops there. Both antibodies and T-cells are made at the body’s mucosal membranes, including those lining the airways, as well as in the blood, and this mucosal immunity is causing excitement among some scientists, though vaccine makers have so far paid it scant attention.

“The virus comes in and it lands on your mucosal surfaces,” explains Krammer. “If it’s neutralised right there, it’s game over.” Unable to replicate and penetrate deeper into the body’s tissues, the virus is prevented from causing not only disease but also infection, meaning the person can transmit it no further. It’s not yet clear if the Pfizer and Moderna vaccines block transmission, as well as preventing disease, but a vaccine that did so could bring the pandemic to an end sooner. And it could do it without the need for an injection – just by using a nasal spray or inhaler.

Antibodies come in different forms that vary according to their biological properties and the tissues in which they are expressed. Like the Pfizer and Moderna vaccines, most Covid-19 vaccines in development elicit IgG antibodies in the blood, but the main antibody secreted in the upper respiratory tract, essentially the nose and throat, is IgA.

In June, in a study that has now been accepted for publication in a peer-reviewed journal, a French group detected IgA antibodies in the blood of Covid-19 patients as early as a day after the onset of their symptoms. IgA levels peaked three weeks later, a week before IgG peaked. Then in August, a Canadian group reported the same finding in saliva. “The IgA response comes up early and dissipates quickly, whereas the IgG response persists,” says immunologist Jennifer Gommerman of the University of Toronto, one of the lead authors on that study.

The short duration of that IgA response might not matter as much as the fact that it peaks early – within a day or two of the innate response. The adaptive immune system kicks in if that innate response fails – it’s the second line of defence – but if you could enhance that early IgA response you could still block infection and prevent the person from feeling ill at all. Researchers have some reason to hope this may be possible.

IgA occurs in different forms at the mucosal membranes and in the blood. In the blood, it circulates singly, while at the membranes lining the airways it is secreted in pairs or even clusters. There is some evidence that doubled up, IgA antibodies’ capacity to neutralise the virus increases significantly, probably because each pair has twice as many binding sites at which to capture the invader. “If you have an antibody on its own, it works pretty well,” says Guy Gorochov of the Sorbonne University in Paris, who led the French study of IgA. “If you have a pair of them, it is far more effective.”

An inhaled vaccine against flu that elicits a local immune response in the airways already exists and there are Covid-19 vaccines in development that do the same, though they are a long way from clinical trials. Researchers are intrigued by the possibility that, besides antibodies, such a vaccine could also stimulate a kind of T-cell that is produced in the lining of the respiratory tract, called tissue-resident memory T-cells, and that these could contribute to shutting down infection rapidly. What’s more, measuring this local response could give an early and accurate indication of a person’s capacity to fight off the disease. “The work we’ve done in the past, with other respiratory viruses, suggests that IgA in the nose is often a much better correlate of protection than circulating antibodies,” says Chiu.

There’s a lot more work to be done before the human immune response is fully leveraged to fight Covid-19 and what is learned in the context of this disease could be applied to others, especially when it comes to therapies that modify the human immune response rather than the virus. For now, though, most experimental vaccines and therapies target antibodies, which are virus-specific and one type of antibody, IgG, in particular. One piece of good news, where these are concerned, is that several studies, including Gommerman’s and Krammer’s, have now demonstrated that IgG levels remain high for up to eight months after infection. The same durability of antibody response has yet to be demonstrated for any vaccine, but these findings bode well.

The best news of all is that at least two vaccines now exist that seem to protect us against Covid-19 and that the chances are high that some of the most vulnerable people in the world will benefit from them within months. It remains an extraordinary and unprecedented feat to have built such a vaccine, and shown it to be safe and effective, before the disease they protect against is one year old – and before the pandemic is over.

Reliable And Affordable Bulk SMS Provider For Businesses And Enterprises